“Unless we act, climate change will jeopardize land, water, resources and jobs and perhaps exacerbate conflicts,” Ambassador Munir Akram told a UN Security Council Arria-Formula meeting on climate finance, which relates to the money needed for a whole range of activities which will contribute to slowing down climate change and which will help the world to reach the target of limiting global warming to an increase of 1.5°C above pre-industrial levels.

The United Arab Emirates, a non-permanent member of the 15-nation Council and currently its president, organized the meeting held under the format named after Diego Arria, a former Venezuelan UN ambassador. It is an informal consultation process which affords the Security Council the opportunity to hear persons in a confidential setting.

Noting that very few adaptation projects promote integrated approaches, the Pakistani envoy said that adaptation must be the focus of climate finance.

“It is critical to prevent livelihood-driven conflicts and disputes,” Ambassador Akram said, pointing to the most critical areas such as: water, conservation, management and efficient use, inter alia, to halt desertification, especially in the Sahel but also in the Middle East and South Asia.

“Safe drinking water is key in both urban and rural settings as is waste disposal and control air pollution,” the Pakistan envoy said adding Job creation should be an integral part of national adaptation strategy. Climate finance should be deployed to build/re-build sustainable infrastructure – energy, transport, etc. in developing countries as part of efforts to meet mitigation and sustainable development targets.

Ambassador Akram urged developed countries to fulfill their pledge of $100 billion per year in climate finance to support the needs of developing nations.

“We need to simplify procedures to access climate finance for developing countries from multilateral and bilateral sources of climate finance,” the Pakistani envoy said, stressing standardization of project approval process to ensure speedy approach and allocation of finances.

Climate finance, he said, needs to be complemented by capacity building in the developing countries, to design and prepare a pipeline of viable projects that promote adaptation and mitigation and the sustainable development goals and can attract public or private investment.

The Pakistani envoy said that climate finance should also be accompanied by access to and local application of the technologies and processes required for efficient adaptation and mitigation.

“We should ensure that double counting is avoided and climate finance should be in addition to the commitments by the developed countries under other framework,” he added. 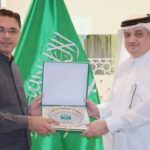 ISLAMABAD: Pakistan Muslim League (PML-N) leader Ishaq Dar on Monday arrived in Islamabad from London to assume the responsibilities as the Federal Minister for Finance […]