WTI crude Oil : traded around $110 per barrel on Thursday after falling 12% in the previous session for its biggest drop since November, as the UAE called on OPEC+ to boost production faster to ease turmoil in the energy markets.

Oil prices were also pressured as investors looked optimistically toward a possible de-escalation of the Russia-Ukraine war, with the foreign ministers from both countries set to meet in Turkey later today.

The market action came just days after crude prices closed at the highest level since 2008 on Monday.

The Russian invasion and ensuing sanctions exacerbated supply chain problems created by the pandemic and caused commodity prices across the board to soar.

Meanwhile, the heads of OPEC and Chevron said this week there is no shortage of oil, while Iraq insisted there is no need to ramp up production more than planned 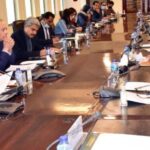 Next Article Wheat Surged To Its High Peak Of $12.8 On Global Supply Issues

Brent: Crude Oil  futures surged more than 3% toward $88 per barrel on Monday following reports that OPEC+ was considering cutting output by more than 1 […]

Crude Oil Trading Around the 89 $ Per Barrel Level

Brent Crude  Oil : futures were trading around the $89 per barrel level, down more than 20% this quarter, pressured by mounting fears about a […]