Carol Liao, a 30-year vendor of herbs and massage chairs in Oakland’s Chinatown, opens her shop doors only for customers she knows, those who have visited before, or better, placed a phone order for one of her $9,000 massage chairs.

Some shopkeepers and restaurant owners in Chinatown say business is gradually improving so far this year. Liao isn’t so sure. She was broken into once last year. Two immediate neighbors have boarded their stores and two more have moved out for safety reasons.

Even as COVID-19 abates, Liao said, the threat of crime deters commerce. She still has repeat customers, so she stands out at the curbside to make sure no suspicious people enter the shop. So far, so good.

“The reason (business) is lower this year is, first off, because of the safety, too many bad incidents, the shootings,” said Liao, who’s from Taiwan. “This year is worse than last.”

The mostly Cantonese, 20-block tract of Oakland businesses has become safer since the city police department stationed cars and foot patrols there in August last year, Chinatown Chamber of Commerce President Carl Chan said. No violence targeting shoppers has been reported since then, he said. Robberies, assaults and a killing had been reported in the months prior.

He said some of the roughly 300 shops and eateries in the zone, which was not known for high crime before 2020, have lengthened their hours to compensate for an estimated 15% loss of business in 2020-21. The crime rate rose between March 2020 and August 2021, coinciding with COVID-19 and the backlash against Asians.

The second quarter of 2021 saw a spike of 2,478 cases, compared to 1,289 in the third quarter and 535 in the fourth, Stop AAPI Hate data show. Verbal anti-Asian incidents make up 63% of reported cases, and 16% of reports were of physical violence. Chinese Americans made up 42.8% of the people reporting i

“Overall, we know that the top cities are San Francisco and New York, which have high concentrations of low-income Asian Americans in dense areas, and that’s correlated to more hate incidents,” said Russell Jeung, the Stop AAPI Hate founder and a professor in the Asian American Studies Department at San Francisco State University.

Crimes targeting Asians rose by 150% in 2020 over 2019, when former U.S. President Donald Trump blamed China for the coronavirus outbreak that began sweeping the United States about two years ago.

Liao’s fears still resonate around much of the United States, where anti-Asian sentiment remains a threat one year after a bellwether Atlanta-area spa shooting.

The shooting of March 16, 2021, killed six Asian women. The shooter was sentenced to life in prison. The crime drew widespread attention to a growing rash of violence and slurs against Asians nationwide during the COVID-19 pandemic that had begun a year earlier in China.

Killings of Asian women in New York City in January and February 2022 show that the attacks haven’t ended, Jeung said. In San Francisco’s Chinatown this month, a camera store was robbed during the daytime. In another incident, on an early March morning in Oakland, two Chinese-owned shops — closed at the time — were hit by bullets during a gun battle, alarming Liao and her customers.

Chinatown veterans attribute the continued crime wave to friction in Sino-U.S. relations, the high number of cash-only transactions and a sense that it’s easy to avoid arrest due to defunding of some urban police departments since mid-2020 in response to the Black Lives Matter movement.

Veteran San Francisco restaurateur George Chen said violent crime such as robberies against Chinese-owned businesses had “almost become normalized” because “China is deemed to be an enemy and not just a competitor.”

Chen’s comment echoes a foreign policy speech given by U.S. President Joe Biden in February in which he called China the “most serious competitor” to the United States.

The chief executive officer of the high-end China Live restaurant uses surveillance cameras and employs a security manager to keep his staff of 100 safe. San Francisco’s Chinatown is an upmarket area that is popular with tourists.

“There are more police patrols, but we basically need more self-surveillance as we can’t be relying on more cops to solve the problems,” Chen said.

Today’s anti-Asian crimes and remarks can be traced back to the previous century, when Asian immigrants were seen as second-class citizens and barred from citizenship until 1952, Columbia University professor Jennifer Lee wrote in a January 2021 study.

Trump’s “China virus” comment “reanimated a century-old trope that Asians are vectors of filth and disease, exposing not only the precariousness of their status but also the country’s nativist fault line,” Lee wrote.

The COVID-19 coronavirus was discovered in late 2019 in the Chinese city Wuhan, sparking the world’s first outbreak.

If the anti-Asian crime rate does eventually fall, just the fear of it will persist as long as images of any lingering attacks make the television news, Jeung said.

“That’s the fear paradox,” he said.

Tags :
END THE VIOLENCE AGAINST ASIANS 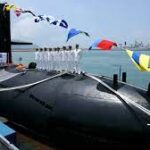 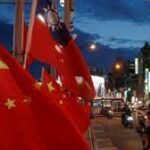