Prime Minister Shehbaz Sharif has directed the Ministry of Power to introduce reforms in the power sector on an urgent basis.

In a meeting with Khurram Dastgir in Islamabad on Wednesday, PM Sharif also said immediate steps must be taken to operationalize power plants that are still shut.

The newly appointed power minister is an electrical engineer by profession and has been tasked with gigantic power sector issues including load-shedding and much-needed power sector reforms.

He faces a number of challenges which include payment of overdue amounts to Independent Power Producers, Nuclear Power Plants and power plants established under the China Pakistan Economic Corridor.

Dastgir’s meeting with the PM comes a day after the prime minister said load-shedding must end in the country by May 1.

The PM was informed that 20 out of 27 power plants which were non-operational for more than a year have now been made operational and that there is a power shortfall between 500 MW to 2,000 MW in the country. He was told that the main reason for load-shedding is a lack of securing timely supply of fuel by the previous government for running power plants. 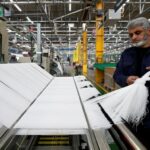 Next Article Minister Vows To Sharpen Focus On SME Development

The State Bank of Pakistan Encourages Banks to Increase Adoption Of Online Banking by Collaborating with Tech Firms ,the importance of digitalization of banking and […]