Brent Crude; futures fell below $113 per barrel on Tuesday after rising for three straight sessions, as concerns over a possible global recession and a challenging demand outlook weighed on oil prices.

Political and business leaders flagged the risk of a worldwide recession at the annual Davos economic summit amid multiple threats.

IMF Managing Director Kristalina Georgieva said she did not expect a recession for major economies but could not rule one out. Investors also worried that elevated oil prices could dent consumption for fuels worldwide.

Meanwhile, lingering concerns over tight global supply and hopes for demand return in China provided some support to crude prices.

The head of Saudi Aramco told Reuters the world is facing a major oil supply crunch as energy firms are afraid to invest in the sector as they face green energy pressures.

Chinese demand is also expected to pick up as Shanghai prepares to reopen and authorities ramped up policy support. 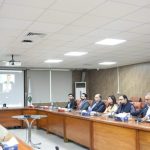 Brent crude oil soared as much as 6.5% to cross $104 a barrel in the early trading on Monday in Asia after Western nations imposed […]

In September-January 2021/22, about 34 thousand tons of sunflower oil were exported from Kazakhstan, which is 21% less than in the same period last season. Konstantin […]