Brent Crude Oil  Rose above $100 per barrel on Friday and were set to finish the week higher, supported by a tightening supply outlook as potential output cuts by OPEC+ countered expectations of a surge in Iranian oil exports and fears of a global economic slowdown.

Earlier this week, Saudi Arabia warned that OPEC+ could cut production to stabilize volatile markets, and some OPEC sources told Reuters that such a move may not be imminent and would coincide with the return of Iranian oil to the global market. In the US,

Meanwhile, Brent prices tumbled 1.9% on Thursday as talks between Iran and the West to revive the 2015 nuclear deal showed signs of progress. 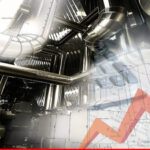 Next Article IMF To Release Tranche On Monday After Board Meeting: Miftah