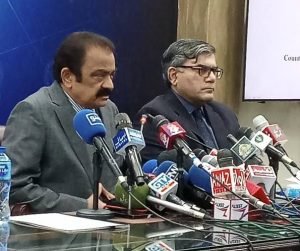 Interior Minister Rana Sanaullah said on Tuesday that the Pakistan had gathered “irrefutable evidence” to establish that India was involved in Lahore’s Johar Town blast in 2021 among other terrorist activities in Pakistan.

He said this while addressing a press conference here along with Punjab Counter Terrorism Department Additional Inspector General Imran Mehmood.

The minister said three terrorists linked to India had been arrested in connection with the 2021 blast near the residence of Jamaatud Dawa chief Hafiz Saeed in Johar Town.

Three people died and 21 others, including women and children, sustained injuries when an explosives-laden vehicle exploded near the house of Hafiz Saeed, on June 23, 2021.

Hafiz Saeed was not at home, the minister said, adding that his family could be the terrorists’ target.

Subsequently, the Anti-Terrorism Court of Lahore in January this year awarded death penalties to four convicts on nine counts each for their involvement in the Johar Town blast.

The ATC judge had awarded death sentence to Peter Paul David, Sajjad Hussain, Eid Gull Khan and Zia Ullah on three counts under each of Sections 302 (b) of Pakistan Penal Code, Section 7-ATA and Section 3-ESA, besides 17 years’ rigorous imprisonment and fine of Rs350,000 to them under different sections.

“We have decided to raise the issue of Indian terrorism in the United Nations through the Ministry of Foreign Affairs,” the interior minister remarked during the presser.

“Pakistan has been burning in the fire of terrorism for a long time… whenever a terror incident takes place India is found involved in it in one way or another,” he added.

Sanaullah said terror attacks backed by India targeted mosques and imambargahs in Pakistan. “We will continue to expose the ugly face of India in front of the world.”

The minister said the arrest of spy Kulbhushan Jadhav and his statement was sufficient to prove that India was involved in every act of terrorism in Pakistan and was adopting different ways for the purpose.

He said they had “undeniable evidence” that could establish India and its premier spy agency (Research and Analysis Wing) were involved in different terror incidents.

After investigation it transpires that India is involved in the Johar Town terror act and its own narrative also tells about its involvement,” he added.

He said India had transferred more than $0.8 million to the terrorists to carry out the task.

Today, the senior police officer will brief you on a terrorism incident that Pakistan has decided to present before the international community and expose India’s “nefarious” agenda.

“This incident took place some time back and we have caught all the culprits related to this. India has to some extent accepted the responsibility for it,” he said.

As much as 200 kilogrammes of explosive materials were used in the blast and a car was used in it. The explosion resulted in the death of three people and injured 22, including two police officers.

“To date, no terrorist organisation has accepted the responsibility of this attack. Since this was a residential area, cars and homes were severely damaged,” the senior police official said.

As soon as this blast took place, CTD registered a first information report and within 16 hours, the department “traced” the case. Also, in the initial 24 hours, CTD arrested three terrorists, Mehmood said.

The first character was Peter Paul David, Mehmood said, who was traced through the vehicle, he said, noting that the terrorist supervised the operation.

Next Article Gold prices internationally and Domestically in Pakistan on DEC 14, 2022

How To Apply For Passport Online:  Requirements for Online Passport: Before applying please have the following ready: Supporting documents. Photograph up to 5MB captured . […]

Today currency rate in Pakistan according to international currencies as of 14th September 2022. The latest prices of USD to PKR, EUR to PKR, GBP […]