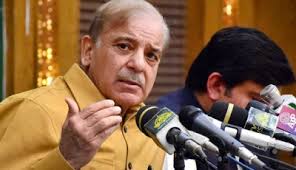 Prime Minister Shehbaz Sharif has said that Pakistan is out of risk of default due to difficult decisions taken by the coalition government.

The premier said the government is taking all possible steps to further strengthen the national economy and is striving with priority measures to reduce price hikes and provide relief to the masses.

The prime minister expressed these views while talking to a delegation of Jefferies, a leading global investment banking and capital markets firm. Minister for Finance Ishaq Dar was also present during the meeting, PM Office Media Wing said in a press release.
The prime minister regretted that unfounded rumours were being spread about the economy of Pakistan and reprehensible efforts were being made to create havoc.

He said the coalition government without caring for the political price, saved the country from the repercussions of the previous four years of maladministration by the former government.
Welcoming the delegation, the prime minister invited the firm to open its office in Pakistan.

The delegation termed the economic recovery of Pakistan as a good sign under the leadership of prime minister that faced the economic challenges in an effective manner and put the country on the path of economic stability.
According to a research house, the CDS had been at 4.2% in January 2021.

Finance Minister Ishaq Dar and many financial experts have reiterated that Pakistan will not default on any of the international payments and that volatility in the CDS had nothing to do with the country’s default risk.

ISLAMABAD: Pakistan exported textile products  from the country reached to $5,941.099 million during the first four months of the current fiscal year (2022-23), Pakistan Bureau […]

ISLAMABAD: A business delegation of Iran led by Shokouhian visited Islamabad Chamber of Commerce and Industry and showed interest to make joint ventures and investment […]