INDIA: palm oil imports in January plunged 29% from a year earlier, as a rally in tropical oil prices to a record high prompted refiners to increase buying of rival soyoil and sunflower oil, a leading trade body said on Monday.

Lower purchases by the world’s top edible oil importer could cap the rally in palm prices, but may support U.S. soyoil futures and sunflower oil from the Black Sea region.

India imported 553,084 tonnes of palm oil in January, compared with 780,741 tonnes a year earlier and 565,943 tonnes in December 2021, the Mumbai-based Solvent Extractors’ Association of India (SEA) said in a statement.

In January, crude palm oil (CPO) was being offered at around $1,510 a tonne, including cost, insurance and freight (CIF), in India, compared with $1,506 for crude soybean oil and $1,475 for crude sunflower oil, the SEA said.

“Even in February, combined imports of soyoil and sunflower oil are likely to be more than palm oil,” said a Mumbai-based dealer with a global trading firm.

Palm oil imports could recover a bit from March as the government has cut the Agriculture Infrastructure and Development Cess (AIDC) on CPO imports to 5% from 7.5%, the dealer said.

Mindful of an electorate that is highly sensitive to food price inflation, the government in the past few months has tried to rein in domestic prices by reducing import taxes, imposing stockpile limits and suspending futures trading in edible oils and oilseeds.

India imports palm oil mainly from top producers Indonesia and Malaysia, while other oils, such as soy and sunflower, come from Argentina, Brazil, Ukraine and Russia. 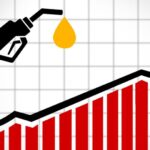 Crude oil prices trading Volatile to above 78 $ Per Barrel