Authorities have been trying to bring down cooking oil prices, which have risen about 40% from a year earlier in line with high global palm oil prices.

Indonesia, the world’s biggest producer and exporter of palm oil, will introduce a single price for cooking oil sold in the local market and bring in rules to avoid “subsidy leakage”, Trade Minister Muhammad Luthfi told a news conference.

“We will bring in limited restrictions, we are not banning, but selectively restricting used cooking oil, olein products and CPO (crude palm oil) to ensure enough supply for the domestic market,” he said, in response to a question on whether he is considering banning exports

Separately, in a statement to the media the office of the chief economics minister said the single price policy for cooking oil – at 14,000 rupiah ($0.9766) a litre – will take effect from Wednesday.

The government will provide 7.6 trillion rupiah ($530.17 million) in subsidies for 250 million litres of cooking oil every month for six months to maintain this price point, it said That was nearly double the 3.6 trillion rupiah subsidy allocation the government announced on Jan. 5. The ministry said the subsidy will be funded from a levy on palm oil exports. Indonesia’s inflation rate rose to an 18-month high of 1.87% in December, although still below the central bank’s 2% to 4% target range. 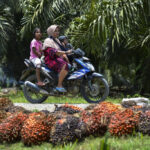 Crude Oil: prices were near flat on Friday, as optimism about a possible rise in energy demand in China faded and the market weighed concerns […]