The  International Dollar Index rate appreciated past 109 on Monday, hitting its highest levels in 20 years, after Federal Reserve Chair Jerome Powell delivered a stern commitment to bring down inflation by keeping interest rates higher for longer in a policy speech at the Jackson Hole conference late last week.

He also acknowledged that the fight against inflation may cause some economic pain, but warned that “failure to restore price stability would mean far greater pain.”

Investors now look ahead to more speeches from other Fed officials this week, as well as the monthly US labor report and final manufacturing PMI readings for August.

The dollar index firmed up above 108 approaching a 20-year high of 109.3 reached in July, underpinned by expectations that the Federal Reserve will continue to aggressively raise interest rates to bring down inflation.

Among the most hawkish statements so far, St. Louis Fed President James Bullard said Thursday he is considering support for a third straight 75-basis point rate hike in September and added he is not ready to say the economy has seen the worst of the inflation surge.

While Today Currency Rate In Pakistan:

Today currency rate in Pakistan according to international currencies as of 29th August 2022. The latest prices of USD to PKR, EUR to PKR, GBP to PKR, AUD to PKR are given at this page. These currency prices are provided by open market currency exchange dealers, and currency rates in Pakistan are updated four times every day to keep them fresh and relevant for users. 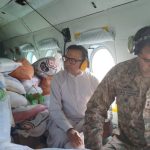 MOSCOW :  Iran hopes to expand energy cooperation with Russia as several bilateral oil and gas agreements are in the pipeline to be signed within the next half a year, Iranian deputy […]

PESHAWAR: Following heavy torrential rains and flash floods in different parts of the country, including Khyber Pakhtunkhwa and Balochistan, departments of Federal Government have taken […]