Internationally Palm oil Trading Set A Weekly Gain , Exports Are Slumps To 29 % Due to Slow Demand

JAKARTA: Malaysian palm oil futures were set for a weekly gain, even as prices fell on Friday, weighed down by profit-taking ahead of the Lunar New Year holiday.

The benchmark palm oil trading contract for April delivery on the Bursa Malaysia Derivatives Exchange lost 19 ringgit, or 0.49%, to 3,870 ringgit ($902.10) a tonne in early trade.

While Malaysian palm oil  were trading below the MYR 3,900 per tonne mark, close to levels not seen in a month, pressured by a stronger ringgit and worries about weak demand.

Exports from Malaysia, the world’s second-largest producer, during January 1-15 slumped roughly 29% from the previous month,

As shipments to India and China slowed, cargo surveyors’ data showed. On top of that, Malaysia has recently warned that it could stop exporting palm oil to the EU in retaliation to a new law aimed at protecting forests through strict palm oil sales regulation.

On the supply side, Ivy Ng, regional head of plantations research at CGS-CIMB Research, expected Malaysia’s output to rise 3.3% to 19.1 million tonnes this year as labor shortage issues would likely ease in mid-2023. 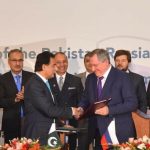 Next Article Russia Exports Oil To Pakistan: Payments Will be In Currencies of ‘Friendly’ States

Market News : Malaysian palm oil futures fell belw MYR 3,790 per tonne on Monday, the lowest in two months, and tracking the retreat for […]

Brent Crude: futures jumped above $116 per barrel on Tuesday, rising for the third straight session, amid reports that the UAE and Saudi Arabia are […]

Palm Oil Racks Up To 6000 Ringgit Per Tonne

Malaysian palm oil: climbed above the MYR 6,000-a-tonne level, a level not seen in two weeks, as investors assessed signs of more robust exports against […]