Karachi : KMC ( karachi Metropolitan Corporation) is starting to work on the metropolis’s first ever solar Park in a bid to produce clean and clear energy and help reduce the load on the national grid.  Built in a busy area of Karachi, this will become one of the first solar park’s in Karachi.

Barrister Murtaza Wahab, Karachi Metropolitan Corporation’s (KMC) administrator, performed the ground breaking of the first ever solar park initiative. It was conducted at Kidney Hills, a park in Karachi.

On this occasion Barrister Murtaza Wahab tweeted that KMC has commenced work on a project that is capable of generating a large amount of energy which totals up to 100 Kilowatt.

“The initiative will help KMC produce clean energy which will then be set off for paying the electricity bill of street lights in KMC controlled areas” said Barrister Murtaza Wahab in his tweet.

Speaking to the media, Wahab said that the project will be operational in a few months and even stated how initial preparations are coming to an end. This solar park, once functional, will generate 100 Kilowatt of electricity.

According to details, this solar park will produce 100 kilowatt of electricity at a cost of 5 million rupees per month. The electrical output given out by the solar farm will be used in street lights and traffic signals thus lowering governmental costs and taking Pakistan towards a sustainable and environmental friendly future.

The Civil Aviation Authority (CAA) shared that it has plans to switch all the airports across the country towards solar energy, making the mechanism efficient. In continuation to this it has also been directed to the relevant authorities to come up with a feasible plan which will help in converting Jinnah International Airport of Karachi to solar power. 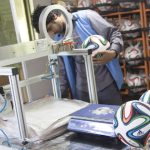 BEIJING: Pakistani Pine nuts exports to China in the first three months of this year achieved a historical figure of $25.13 million, according to the […]