An anti-corruption special court has ordered the transfer of the Hyderabad-Sukkur Motorway (M-6) Matyari section corruption case to the National Accountability Bureau (NAB). The court granted the NAB chairman’s petition to take over the Rs. 2.25 billion graft scandal.

The special court gave a reserved judgment on the NAB plea. The department has named 11 suspects in the M-6 graft investigation.

According to details, the National Highway Authority (NHA) released Rs. 4.09 billion to DC Matiari for the purchase of highway land. The accused obtained Rs 1.82 billion in cash from a bank to purchase land for 70 kilometers of road.

He then transferred Rs. 4 billion to another account and profited by Rs. 540 million. AC New Saeedabad paid the landowners in cash rather than by cheque.

M6 Progress
The Sindh government hopes to complete the Hyderabad-Sukkur Motorway sooner than expected. The decision was made earlier this month at a high-level meeting presided over by Chief Secretary Sindh, Dr. Muhammad Sohail Rajput.

Rajput prioritized the acquisition of land in Hyderabad and Shaheed Benazirabad for the M6 project. The group agreed to appoint Land Acquisition Officers for the M6 Motorway project. The government plans to finish the M6 highway in 24 months.
The Sukkur-Hyderabad Motorway is the final stretch of the Peshawar-Karachi Motorway, which will connect Pakistan’s major cities. This project will construct a 306-kilometer-long six-lane motorway on a turnkey basis with a concession tenure of about 25 years. 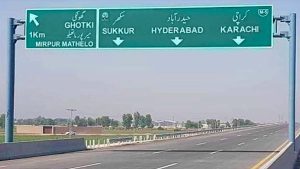 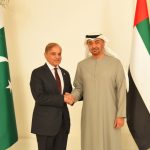 PM Shehbaz Heads to UAE to Discuss Trade and Investment

ISLAMABAD: Prime Minister Shehbaz Sharif left on Thursday for the UAE on a two-day official visit at the invitation of President Sheikh Mohamed bin Zayed […]

Information Minister Marriyum Aurangzeb announced on Monday that a total amount of $8.57 billion has been pledged at the ‘International Conference on Climate Resilient […]

KARACHI: Polling for the second phase of local government elections in the 16 districts of Karachi and Hyderabad is underway, on Sunday. Polling began at […]