Overview and Highlights on Soybean Sunflower and Palm oil Market 2022

Overview of the Ukrainian sunflower market

Before the conflict, Ukraine ranked first in the production and processing of sunflower seeds ( November 21). The closing of the marketing year (September 2021-August 2022) provides an opportunity to assess the impact of the conflict on sunflower seed trade flows. Prior to the conflict, Ukraine produced sunflower mainly for domestic processing, but also exported to China, the EU and Turkey and oil to India, China and the EU. The outbreak of hostilities dealt a huge blow to logistics, infrastructure, and access to ports, as railroads, roads, warehouses, and processing plants were blocked. Processors have scaled back operations, facing both limited export opportunities via regular shipping routes and shrinking storage space. As a result, sunflower surplus had to be sent to new export destinations to geographically accessible countries with available processing capacity, such as the EU, Turkey and Moldova.

Shipments rose significantly in September, with less than a quarter of a million tons of sunflower seed products leaving Ukraine under the Black Sea Grain Deal between its start on August 1, 2022 and the end of the marketing year. Given the market dynamics, sunflower seed products accounted for a small share of the total compared to coarse grains and sunflower shipments were minimal. Changes in destinations and product types have impacted global consumption as prices rose and exports declined.

In the EU, access to low-cost Ukrainian sunflower seeds for processing led to the production of sunflower meal and oil, which accounted for a larger percentage of total oilseed consumption in MY 2021/22.

In China, pandemic-related restrictions, a weaker economy and sluggish consumption, combined with high global prices and lower sunflower oil supplies from Ukraine, contributed to a decline in total vegetable oil imports for the year.

Forecasts for trade in sunflower and processed products from Ukraine for the current year reflect a decline in production expectations, as well as an assumption that distorted trading patterns and limited processing will continue. Currently, Ukraine’s exports for 2022/23 MY are projected at 1.95 million tons of sunflower , 2.75 million tons of sunflower meal and 3.60 million tons of sunflower oil . The EU is expected to continue importinglarge volumes of sunflower seeds due to the impact of drought on their own oilseeds. Continued instability in the region, damage to infrastructure and the fragility of the Black Sea “Grain Deal” remain points of uncertainty that will determine the volume and direction of exports that can leave the country.

while the Palm oil overview exports from Malaysia market are high despite a decline in overall figures. Malaysian palm oil exports have gained market share this year mainly due to restrictive trade policies in Indonesia, the world’s largest producer and exporter of palm oil. However, Malaysian exporters have not been able to fully capitalize on global palm oil demand due to persistent problems in attracting foreign labor, which led to a decline in exports in 2021/22 MY.

Malaysian palm oil exports peaked in 2018/19 but have since declined by 15 percent to 15.5 million on 2021/22. Global import demand declined in 2021/22 due to weaker economic growth and very high vegetable oil prices. In addition, attracting foreign labor for cultivation and harvesting in Malaysia has become a problem due to COVID-19 restrictions. Despite downward pressure faced by global palm oil trade in 2021/22, Malaysia has increased its global market share, offsetting Indonesia’s weaker exports. While exports are forecast to increase in 2022/23, Malaysia’s share is expected to decline due to increased competition from Indonesia , oilworld.ru reports citing USDA.

oilseed production forecast for 2022/23 is cut by 1m. tons to 645m, reflecting lower soybean crops in Argentina and sunflower crops in Ukraine, which more than offset higher rapeseed production in Australia and the European Union. Oilseeds trade rose slightly due to increased exports of Argentine soybeans and Australian rapeseed. World production fell slightly due to lower processing of Argentine soybeans and Malaysian palm kernels. Total global oilseed stocks rose mainly due to an increase in soybean stocks in China.

The seasonal average farm price for soybeans in the US is unchanged at $14.00/bu.

Global overview of oilseed production market in 2021/22 is set to rise marginally to 605 million tonnes as a larger sunflower crop in Argentina offsets lower production of Argentine soybeans, Chinese sunflowers and Malaysian palm kernels. Trade in oilseeds is growing due to the increase in soybean imports to China. Global oilseed ending stocks rose on the back of higher soybean shipments to China and Argentina. Meal production is declining, and world trade is declining due to reduced exports of soybean meal from Argentina and India. Food consumption has increased slightly. World vegetable oil trade is declining, mainly due to lower palm oil exports from Indonesia and soybean oil exports from Argentina.

The seasonal average farm price for soybeans in the US is unchanged at $13.30/bu.

Soybean prices in October were slightly lower on average compared to the previous month for the two market leaders in exports, but showed an upward trend during the month. The late recovery was driven by geopolitical events and growing demand for meal, with soybean oil for biodiesel being the main driver of the increase. In Argentina, the expiration of the soy dollar stimulus at the end of September resulted in relatively slower sales this month, oilworld.ru reports citing the USDA.

In October, the average prices for soybean meal in South America were slightly higher. Soybean meal premiums in the US versus South America are down significantly this month from last, with all three exporters trading within $10 a tonne of each other. The United States continues to see strong margins compared to other countries due to strong demand for soybean oil for biodiesel production. 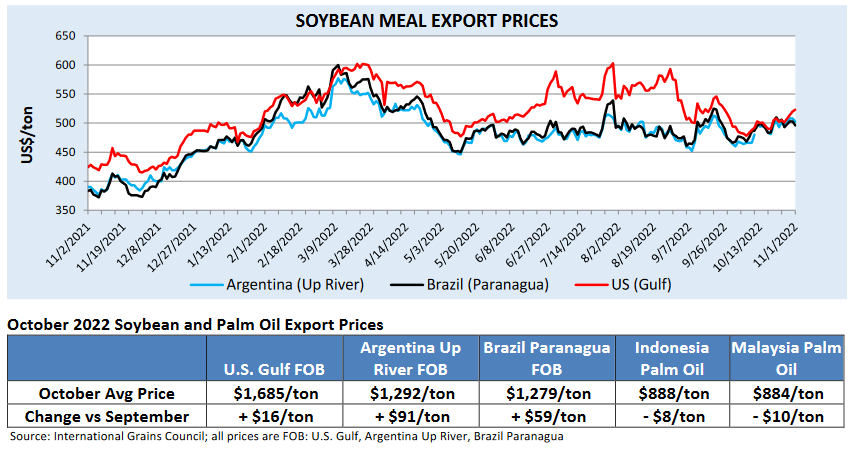 Prices for soybean oil rose in October against the backdrop of positive sentiment in the vegetable oil market and strengthening crude oil prices. The US soybean overview in oil premium to South American  market soybean oil declined slightly in October from September. Average palm oil prices are down from all-time highs earlier this year, supported in the second half of the month by gains from other vegetable oils and uncertainty in the Black Sea.

ISLAMABAD: Jazz, Pakistan’s leading digital operator and one of the largest private sector companies, is fully compliant with all its tax obligations, said a press […]