Pakistan economic outlook expected to be improve in coming months

ISLAMABAD: The trade balance of Pakistan is expected to improve in the coming months on account of import contraction due to a deceleration in domestic economic activities and aggregate demand, the monthly Economic Update and Outlook October 2022 released by the ministry of finance said on Sunday.

“Overall pakistan  economic outlook shows an optimistic picture of the economic performance in the coming months. The CPI inflation is declining, rupee has gained stability, current account balance is on improving trend. These development indicate that economic activity will remain positive and persistent in coming months”, the report added.

Besides inflation, also a manageable current account deficit and guaranteed financing of this deficit by healthy financial inflows are required. When markets get convinced about these prospects, speculative bubbles in the exchange market would be highly unlikely.

In the baseline short to medium run, helped by sound domestic fiscal and monetary policies, the current account deficit is expected to reduce. A major risk factor, though, relates to the necessary imports to absorb the devastating consequences of the floods. However, downward revision of Pakistan economic  main trading partners’ outlook may have a downside risk for exports in coming months.

For fiscal sector, catastrophic flood require rehabilitation and massive expenditures which will pose significant challenge for fiscal consolidation. On the other hand, growth prospects have weakened, along with contained economic activities and low demand will impact on resource mobilization. Thus, FY2023 is moving with challenges, seeking balance policy mix for stabilization. 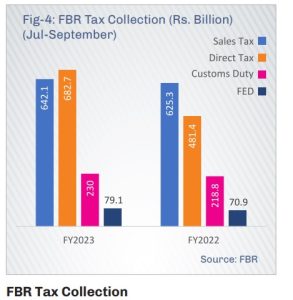 In the long run, sound fundamentals and a healthy growing economy, a significant raise is required in gross fixed capital formation instead on consumption. This will increase the National Income significantly. Further, there is need to enhance the productive capacity and productivity in each sector to substitute imports by domestic production and provide more supply capacity to the foreign markets, the report added.

The report added that the provisional net tax collection in September FY2023 stood at Rs 684.8 billion against Rs 534.0 billion in the same month of last year, posting a growth of 28.2%. Thus, the first quarter of the current fiscal year ended up with a growth of 17% with a net tax collection of Rs 1633.9 billion against Rs 1396.4 billion in the comparable period of last year. Similarly, the target for the first quarter has also been surpassed by Rs. 24.4 billion.

The Current Account posted a deficit of $ 2.2 billion for July-September FY2023 as against a deficit of $ 3.5 billion last year, mainly due to increase in exports and contraction in imports.