ISLAMABAD: Minister for Finance and Revenue Senator Mohammad Ishaq Dar here on Sunday said that the pakistan government accords priority attention to IT sector to tap its true potential as it has immense potential for growth and could play significant role in strengthening Pakistan’s economy.

The meeting discussed issues related to IT sector declining export and measures to bring it back to a growth trajectory. 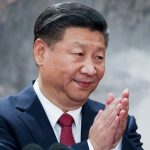 ISLAMABAD:  China has agreed to provide latest meteorological equipment to Pakistan for effectively forecast the environmental changes and natural calamities. Minster for Railways and Aviation […]