ISLAMABD: Pakistan received its first batch of the powerful J-10C from China which is supposed to be one of the most powerful fighterjet in the market, and rumors have suggested that the second batch or fleet of J-10C including six more jets have already been received by Pakistan.(Source 92 news)

The Pakistani Air Force refers to the Chinese-built aircraft as “Dragon from the East” and the government’s sole purpose of this trade was to maintain “security balance” as claimed by the Khan government at the time of the previous fleet.

The news was confirmed by the national news channel 92 news and the Pakistan Strategic Forum also tweeted while confirming that news. Although the news was not published by any government officials and no ceremony was held for the arrival of the fleet but the news of the arrival of the jets is confirmed. Faisal Raza the reporter of 92 news said that;

“The second cape of J-10C has been landed on the operational airbase of Pakistan Airforce, resources have confirmed that the cape consists of 6 new jets which will we be added to the Pakistan Airforce operational use soon, J-10C is the latest multi-role, single-engine, 4.5 generation delta wing jet that has the multi-display and radar options that can be proved very beneficial for the operations of Pak air-force. J-10C is powered with P-8, P-10, P-12, and P-15 missiles.” 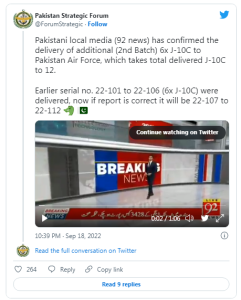 This news comes days after a picture of Pakistan’s Chinese-origin J-10C fighter jets, painted in a pattern resembling the French-made Mirage V jets’ camouflage/paint scheme, went viral on social media. Meanwhile, there were reports that Sudan was considering the J-10C aircraft from China, hinting that it could become the aircraft’s second international customer after Pakistan.

The previous Pakistan  received batch of fighterjet was officially inducted in a ceremony at PAF Base Minhas Kamra in Punjab. This batch consisted of the J-10C batch six jets with serial numbers 22-101 to 22-106. The ceremony was attended by Pakistani Prime Minister Imran Khan. At the event, Khan said;

“It is a big addition to our defense system. I am thankful to China on behalf of our nation for providing these jets in a record time of eight months.”

J-10C has great importance in the defense system of Pakitan and the previous edition was celebrated hugely, and rightly so as it has such good capabilities. J-10C is actually a NATO-designated jet that they often call “Firebird”. J-10 is a single-engine light multirole fighter that can operate in all weather conditions. It was designed to conduct air-to-air combat and strike missions for the People’s Liberation Army Air Force. The J-10C entered service in 2018 and has since been considered one of the most powerful single-engine fighter aircraft. Compared to other jets, the J-10 is being developed on a wider scale, with China reportedly already fielding over 200 and Pakistan starting to establish its first unit.

For enhanced maneuverability, the J-10 has a wide delta wing and two canards behind the cockpit. The J-10C variant is believed to be powered by the locally produced WS-10 Taihang engine. The weaponry is comparable to MiG-29 and F-16, with three weapon pylons on each of the wings and three on the belly. The J-10CE is the Pakistan Air Force’s first modern aircraft since the Chinese JF-17, which was developed in partnership with Pakistan.

Some of the fighter’s most notable features are the presence of the powerful AESA radar, reduced radar cross-section, and availability of the highly long-ranged AESA-guided PL-15 air-to-air missile. The canopy’s single-piece design also eliminates the support framework, which frequently contributes to radar reflection. Even the primary delta wing appears straight, as opposed to the bent surface of the older J-10, J-10B, and J-10C types. It boosts maximum speed while decreasing drag and improving aerodynamic control. 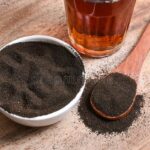 ISLAMABAD: The government has requested the World Bank (WB) for restructuring “Pakistan Financial Inclusion and Infrastructure Project” to complete the national payment system activities and […]