Pakistan reserve drop down by $784 million due to repayment 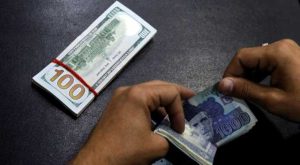 Pakistan’s forex reserves registered a massive decline of $784 million during the week that ended on December 2, the State Bank of Pakistan revealed on Thursday.

According to the central bank’s weekly report on forex reserves, during the period under review, the SBP-held forex reserves fell by $784 million to reach $6.71 billion.

This massive fall was registered due to repayments Pakistan had to make before December 5. Pakistan transferred $1 billion on the sukuk bonds three days before its maturity to Citigroup Inc, which will distribute the funds to creditors.

The repayment had come in line with the commitment made by SBP governor Jameel Ahmad, who had said a week earlier that Pakistan would repay the $1 billion international bond on December 2.

With this repayment, Pakistan had averted the risks of immediate default.

Cumulatively, the total foreign exchange reserves witnessed a fall of $796.5 million to reach $12.58 billion from $13.38 billion during the period under review.

On the same day — December 2 — the Kingdom of Saudi Arabia (KSA) extended the term for a $3 billion deposit in the SBP through the Saudi Fund for Development (SFD) “in support of the Pakistani economy.”

The development had come in support of the reeling economy of Pakistan.

“The Saudi Fund for Development (SFD) extended the term for the deposit provided by the Kingdom of Saudi Arabia in the amount of 3 billion dollars to the State Bank of Pakistan,” a statement from the central bank read.

The statement further read that the extension of the term of the deposit was a continuation of the support provided by the government of the Kingdom of Saudi Arabia to the Islamic Republic of Pakistan.

ISLAMABAD: An acute medicine shortage is looming in the country as the pharma industry is facing serious problems in the opening of letters of credit […]