Pakistan To Import Gas From Azerbaijan

ISLAMABAD: In order to cater to the rising energy demand during winter, the government has decided to import additional gas from Azerbaijan in next couple of months.

Talking to a private TV channel, Minister of State for Petroleum Musadik Malik said that Pakistan would import 20,0000 tons of additional gas from Azerbaijan during the next two months to meet its demand in the country.

He said the Russian petroleum minister would visit Pakistan next month for holding negotiations on an agreement for the import of crude oil from Russia.

The state minister said the government was working on TAPI gas pipeline project to import 1,300 billion MF gas yearly from Azerbaijan to meet the gas shortage in the country. 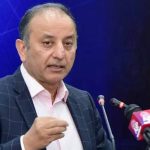 Next Article Pakistan to bring in 20,000 tons gas from Azerbaijan: Musadik

KARACHI:  The rupee has touched a new low of Rs 225 against the US Dollar in the internbank.The latest reports say that the greenback spiked […]

ISLAMABAD:  Govt may slap 17% sales tax on high-grade petrol as it is considering imposing more taxes on imports to cover a projected shortfall of […]

ISLAMABAD: US Ambassador in Pakistan Donald Blome on Wednesday said the United States trade was  considering allowing Pakistan access to the US beef market and […]