Weather Updates : Moderate to heavy rainfall across the US this week has reduced dry spells in winter wheat crops and replenished soil moisture in the corn belt.

Dry weather persists in Argentina and southern Brazil, but rains are expected there over the next 5-7 days, which will improve the condition of soybean and corn crops.

A cold front brought moderate to heavy rainfall to the US Southern Plains, but the rainfall in the western regions was negligible, so they could not remove the drought events.

Drought is also intensifying in the US Northwest near the Pacific coast as winter rainfall has been very low and no rain is forecast for next week.

The Midwest has experienced moderate to heavy rain and snow, with a cold front coming in last week with heavy rainfall.

Dry weather in the south of Brazil has reduced the potential of the soybean and first corn crops, and intermittent rains that will pass during the week will no longer be able to significantly improve the condition of the crops.

In Argentina, rain last week improved the condition of soybean and corn crops, but there was no rain this week, which could exacerbate dry spells at a critical time for crop development when crops are forming and plants need moisture. Rainfall will increase next week and air temperatures will drop, which will reduce plant stress and improve soybean and corn crop potential.

The weather in Argentina and Brazil in the next 2-3 weeks will be decisive for the prospects for the soybean and corn crops. 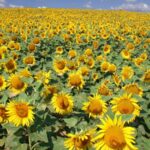 Palm Oil: increased to a 5-week high of 4335 MYR/T, supported by signs of more robust export demand from Malaysia. According to cargo surveyors’ data, […]