ISLAMABAD: The Price of Petrol in Pakistan is likely to comedown from Rs235.98 per litre to Ra226.36 on Friday night for the next fornight.

A local private tv while quoting local industrial units reported that the average Platts price of petrol for motor spirit also plunged by Rs9.55 to Rs92.28 from Rs101.83 for the duration from September 1-15 in Pakistan.

The exchange rate, however, remain on the higher side if compared with the exchange rate registered during August 16-31, it report, pointing out that with unchanged customs duty at Rs15.39 per litre, the cost of one-litre petrol in the refinery slid by Rs7.84 per litre to Rs166.76 from Rs174.61 per litre.

The reports say that the ex-refinery price of one-litre petrol, however, has been estimate to decrease by Rs9.62 per litre to Rs173.43 from Rs183.04 per litre.

They say that the average Platts price for diesel, however, tumbled during September 1-15 by Rs6.46 per litre to Rs133.

The Rs4.76 per litre on Price of Petrol is being charged in the shape of IFEM (Inland Freight Equalisation Margin) and Re0.21 on diesel  Pakistan coalition government under the IMF programme is bound to jack up petroleum levy up to Rs50 on both petrol and diesel to generate Rs855 billion in 2022-23.

Similarly, the exchange rate also remained on the higher side at Rs225.63 against the Rs217.81 registered during the August 16-31 period, showing an increase of Rs7.87.

The ex-refinery price of diesel is estimate to increase by Rs3.04 per litre to Rs231.90 from earlier Rs228.87 per litre after the PSO exchange adjustment. 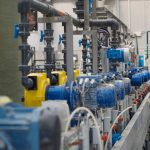 Next Article Currently In Pakistan Around US$3.35 bln foreign funded water projects under implementation

Brent Crude Oil fell below $93 per barrel on Tuesday, extending a sharp decline from the previous session as a weakening demand outlook outweighed signs of […]

Soybeans: increased to a 40-week high of 1633 USd/Bu, amid ongoing concerns about harvests in the world’s largest producers and exporters of processed soy. Argentina […]

ATHENS: A strong 5-magnitude earthquake on Saturday rocked Greece off the island of Kythera, the National Observatory of Athens said. The epicentre of the quake, […]