ISLAMABAD : Federal Minister for Defence Khawaja Asif said on Saturday that in addition to gas, Russia is also ready to offer wheat to Pakistan owing to projection of food shortage in the country on the back of devastating floods in Pakistan.

In a press conference in Islamabad, he said at the SCO summit in Uzbekistan, which Prime Minister Shehbaz Sharif attended, Russia reiterated its resolve to provide Pakistan with wheat in the coming days as there may be shortage of food products.

On the sidelines of the Summit, the Prime Minister held a number of meetings with leaders including the Presidents of China, Russia, Uzbekistan, Kazakhstan, Kyrgyzstan, Tajikistan, Iran, Azerbaijan, Belarus and Turkiye.

He said President Vladimir Putin also invited PM Shehbaz to Russia, the official dates for which will be revealed soon.

Chinese President Xi Jinping has also invited PM Shehbaz – the visit to China is expected in the first week of November, he added.

In meeting with PM Shehbaz at the summit, President Xi also underlined the importance of stability in Pakistan and promised help for repair of crucial infrastructure damaged by floods, the defence minister said.

Asif added that PM Shehbaz was leaving for the UK to take part in the funeral of Queen Elizabeth II, set to take place on September 19, after which he will go to New York to attend the United Nations General Assembly meeting.

‘The world is ready to help us’

During his SCO visit, the prime minister made it clear to world leaders that emissions from global north have affected 32.5 million Pakistanis and sparked a food security issue in the country, stated the defence minister.

“During reconstruction phase after drainage of flood water, we will see the goodwill of the world with Pakistan,” he said. “For now, the world is ready to help us.”

PM Shehbaz ended his visit to Samarkand Uzbekistan on September 16 and his statement at the SCO summit conveyed Pakistan’s vision for the strategic direction of SCO in the face of global political and economic transformation.

Pakistan’s commitment to the principles and purposes of SCO Charter and to the ‘Shanghai Spirit’ as a core value of SCO was also reaffirmed, said a statement from the Ministry of Foreign Affairs (MOFA).

“In his statement, the Prime Minister presented a compelling case for collective action by SCO countries to combat the ravages of climate change,” it said. “He shared details of the human tragedy and the massive devastation caused by the climate calamity that struck Pakistan.”

The PM also expressed deep appreciation for the support proffered by SCO leaders for relief and assistance to the people affected by the floods. 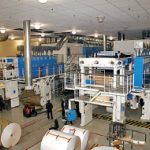 2 thoughts on “Russia Is Ready To Offer Wheat To Pakistan ; Khawaja Asif”

CHICAGO:  wheat futures rose to $11.2 per bushel in mid-April, the highest in one-month and 32% higher than prices before Russia’s invasion of Ukraine amid […]