KARACHI:Pakistan’s central bank has injected slightly over Rs2 trillion into commercial banks for a longer period of up to 70 days to help the financial institutions meet growing financing demand coming from the government.

The government remains the largest borrower from commercial banks, as its reliance on borrowing is constantly on the rise amid a surge in interest payments against debt, increase in budgetary deficit in the post-flood era and acute slowdown in fresh foreign inflows from bilateral and multilateral creditors.

The State Bank of Pakistan (SBP) reported on Friday that it had injected Rs1.93 trillion into commercial banks for 70 days at an interest rate of 16.10% through open market operations (OMO). Besides, it has provided Rs100.65 billion at the rate of 16.24% for seven days.

The central bank has also supplied Rs40.5 billion to Shariah-compliant banks at a return of 16.09% for 70 days. It rejected Islamic banks’ bid for seven-day borrowing. Ismail Iqbal Securities Head of Research Fahad Rauf said that “OMO is a tool available with the central bank to manage liquidity within the banking system. SBP has injected the massive sum into banks to meet growing demand coming from the government”.

Arif Habib Limited (AHL) economist Sana Tawfik explained that one of the primary objectives of the central bank to inject money into the system was to maintain the rate of financing at which the commercial banks lent money to the government.

The increased supplies pushed commercial banks to maintain their lending rate this week in a high inflationary environment, she said.

The rate of inflation has remained significantly high at over 24% in November 2022. However, commercial banks have lent money to the government at around 17% this week, which is almost the same rate at which they provided financing about a month ago.

“Commercial banks provided financing to the government at a historic high of 17% last month. They, however, maintained the rate this week, considering that a section of the market (banks) believes that the central bank policy rate could go further up to control rising inflation,” she remarked.

Rauf noted that the tenure of OMO injections had increased to 60-70 days from less than seven days about a couple of years ago. Besides, “the size of injection has also risen to Rs2-3 trillion these days, as compared to less than Rs1 trillion earlier”. The reasons for the increase in fund size and injection tenure are that the government’s dependence on commercial bank borrowing has been on the rise amid low collection of taxes.

Secondly, foreign fund inflows have shrunk, amid a delay in IMF’s ninth review of the economy.

Thirdly, the government’s demand for financing has increased, since the country faced devastation from floods, which have wiped out around $30 billion from the economy. Meanwhile, banks’ deposits increased by 16% to Rs22.7 trillion in November 2022 as compared to Rs19.7 trillion in the same month of last year.

Rauf stated that the deposit growth rate had remained stagnant at around 15-16% for the past few years.

“Businesses and people, however, have opted to park a big portion of money in banks instead of spending it, due to high inflation and lucrative rate of return on deposits,” he explained.

However, the advance-to-deposit ratio (ADR) dropped by 25 basis points to 49% in November, as compared to the same month of last year despite a significant growth in deposits over the past one year.

Accordingly, the investment-to-deposit ratio (IDR) hiked 12.38 percentage points to 81% in the month, compared to the same month of last year 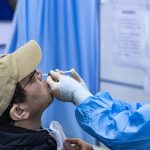 ISLAMABAD: The customs classification committee of the Federal Board of Revenue (FBR) has imposed 20 percent customs duty on the import of “steam-fired absorption chiller”, […]