WTI Crude Oil: falls extended their retreat to more than  5% to below $92 per barrel on Tuesday.

After Iraq’s state-backed Somo stated  country’s oil exports are unaffected by civil unrest via political exit of a prominent cleric.

Iraq’s oil marketer also said that it can redirect crude supplies to Europe if needed, adding to the bearish pressure.

Crude prices  decline for a third straight month amid the darken outlook for the global economy.

Policymakers at the ECB flagged the possibility of a 75bps interest rate hike for its next meeting,

while Fed Chair Powell signaled that the US central bank will maintain borrowing at a restrictive level until inflation subsides, even if it hurts growth.

however; as crude oil falls  after the Saudi Energy Minister stated the cartel could cut production should Iran clinch a nuclear deal with the West and restore exports. 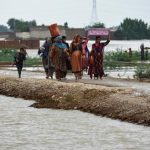 JAKARTA: Malaysian palm oil futures climbed for a second day on Friday, tracking gains in soyoil and crude oil prices, but the contract fell for […]