SINGAPORE (B – Trams / Bloomberg): Russian oil may end up stored in tankers off nations such as Singapore and Malaysia awaiting buyers as consumers assess the repercussions of taking the nation’s crude, according to an analyst at PetroChina Co.

The heavy criticism leveled at Shell Plc following its purchase of discounted oil from Russia after starting its war in Ukraine highlighted the condemnation companies face in dealing with energy exports from the OPEC+ producer.

Since then, Shell has vowed to make no new purchases of Russian crude and buyers have continued to shun cargoes, despite being attractively cheap.

“People just want to lay low for the moment while the situation becomes clearer,” Royston Huan, an analyst at the strategy and market research unit of PetroChina, said at a conference hosted by S&P Global Commodity Insights in Singapore.

Tankers with Russian oil could be parked off the city-state as well as Sungai Linggi in the Malacca Strait, a popular place for stored oil, he said.

Sungai Linggi is an area known for ship-to-ship transfers, where oil is moved from one vessel to another, before being shipped to its final destination. It’s often a method used to mask the origin of a particular crude before delivery, such as grades from Iran or Venezuela.

Zhang Jing, senior oil market analyst for China International United Petroleum & Chemical Co., or Unipec — the trading arm of the nation’s biggest refiner — said at the conference that the company would continue to observe developments around Russia and not be seen as a “reckless company.”

There’s speculation that Chinese buyers may be tempted to snap up the heavily discounted crude from Russia.

Some Russia barrels such as Urals are likely to flow to Latin American or regions in Africa’s southwest, PetroChina’s Huan said. The nation’s flagship grade is unlikely to be taken by European users, he added. – Bloomberg 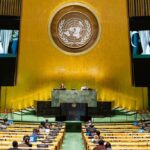 Next Article The Islamophobia Introduced By Pakistan With OIC , UN Declares March 15 As International Day

ISLAMABAD: Pakistan will import around 32.7 Million Barrels (MBL) of crude oil, during the year 2022, under an agreement signed with the Saudi Fund for […]