China Once Again Implemented Lock Down To Fight COVID Outbreak

Shanghai: will lock down the city in two phases to conduct a mass testing blitz for Covid-19, as authorities scramble to staunch a spiraling outbreak that’s challenging China’s zero-tolerance approach to the virus like never before.

The city of 25 million people locked down areas east of the Huangpu River, which includes its financial district and industrial parks, for four days. The lockdown then shifts to the other half of the city, in the west, for another four days, according to a statement Sunday from the local government.

Residents will be barred from leaving their homes, while public transport and car-hailing services will be suspended. Private cars will not be allowed on the roads unless necessary.

Production at Tesla Inc.’s Shanghai factory will be suspended because of the curbs, people familiar with the move told Bloomberg News.

Police officers block an entrance of a tunnel leading to the Pudong area, which has been placed under lockdown, in Shanghai, on March 28.

The sweeping restrictions come as China experiences its worst Covid spread since the virus’s emergence in Wuhan, with more than 6,000 locally-acquired cases reported nationwide on Sunday.

The outbreak is testing the country’s virus strategy, which is proving tougher to prosecute amid more contagious variants and is dragging on the world’s second-largest economy as the rest of the globe normalizes. 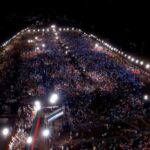