KUALA LUMPUR:Malaysian palm oil futures ticked up on Friday to log a 9.4% weekly jump, as a recent rally in rival edible oils, crude futures, and a declining ringgit lent support.

The benchmark palm oil contract for November delivery on the Bursa Malaysia Derivatives Exchange gained 28 ringgit, or 0.7%, to 4,365 ringgit ($919.72) a tonne, rising for a fourth session in five.

It had earlier jumped 3%, but surrendered gains after leading analysts told a conference global demand for the commodity remains uncertain as strict COVID-19 policies in key market China remains.

Palm oil prices are expected to trade between 3,500 to 4,500 ringgit per tonne in the period from now until the end of March next year due to higher crude prices and weaker ringgit, said Dorab Mistry, director of Indian consumer goods company Godrej International.

Malaysia’s palm oil rally inventories at end-October likely swelled to 2.53 million tonnes, its highest in three and a half years, as production improved while imports slumped, a Reuters survey Production is seen expanding 3% to 1.82 million tonnes, while exports likely rose 4.5% to 1.48 million tonnes, the survey showed.

In top producer Indonesia, the Indonesia Palm Oil Association (GAPKI) said palm oil and kernel oil production is expected to slip to 51.3 million tonnes this year, from 51.6 million tonnes in 2021.

In related oils, Dalian’s most-active soyoil contract rose 1.2%, while its palm oil contract gained 0.7%. Soyoil prices on the Chicago Board of Trade were up 1.2%.

Oil climbed as the dollar eased and supply risks lingered, though recession fears and China’s COVID outbreaks kept a check on prices. 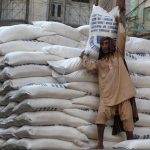 2 thoughts on “Palm Oil Hits 9 Weeks high, due to rally in rival oils, and weaker Ringgit”

ISLAMABAD: National Assembly Deputy Speaker Qasim Suri on Saturday resigned from his post ahead of voting on no-trust motion submitted against him by PML-N His […]

CRUDE OIL : Brent Crude oil  Prices tumbled over 4% to around $86 per barrel on Friday, a level not seen since January and recording […]

Today Gold Prices Internationally And Domestically In Pakistan On Jan 19 , 2023

Gold Prices held above $1,900 an ounce on Thursday, hovering near its strongest levels in nine months on firm expectations that the US Federal Reserve will […]