By Anuradha Raghu
(Bloomberg) — Palm oil, the commodity used in thousands of products from chocolate to shampoo to biofuel, continued a record breaking rally that’s poised to exacerbate inflationary pressure across the globe.

The world’s most consumed edible oil jumped above 6,000 ringgit ($1,434) a ton for the first time ever on Wednesday, extending a surge that’s seen prices advance almost 80% since mid-June. The market has tightened significantly as a shortage of supply from key producer Malaysia coincided with a recovery in demand from economies rebounding from the pandemic.

“For the supply side, everything that could go wrong, went wrong,” said Ivy Ng, the regional head of plantations research at CGS-CIMB Securities. Problems “hit all the key producing countries, whether it’s palm oil or a competing oil. There’s no reprieve in the short term and people are reacting to that.”

Palm oil’s rally is mirroring that of other commodities such as petroleum and is likely to provide an additional challenge to governments seeking to stave off inflation while supporting growth. Global food prices rose toward a record last month, while the cost of retail gasoline in the U.S. is near the highest in more than seven years. The edible oil could climb even higher, according to Abdul Hameed, director of sales at Manzoor Trading in Lahore, Pakistan.

The market is in “uncharted territory,” said Hameed, adding that palm oil prices could reach 6,200 ringgit to 6,500 ringgit a ton if Malaysian inventories continue to shrink this month. “The global supply and demand situation is a very, very big concern.”

Palm oil’s supply squeeze started in early 2020 after Malaysia shut its borders and froze hiring of migrant workers to stem the surge in Covid-19 cases. That led to a labor shortage across plantations in the second-biggest grower, with billions of dollars worth of fruit left rotting on trees. Inventories fell to a six-month low of 1.55 million tons in January after output slid more than expected.

The decision last month by top producer Indonesia to curb some shipments to bolster domestic supply tightened the market further. Palm oil makes up about a third of the world’s supply of edible oils.
Reports of La Nina damaging soy crops in key producer South America and escalating tensions between Ukraine and Russia — which make up 80% of global sunflower oil exports — have added to the overall squeeze and flowed through to the boost in palm oil prices.

“The combination of all these unexpected events all came in together at the same time,” Ng said. 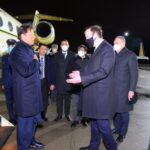