The relief package, presented by Ministry of National Food Security & Research (MNFS&R) has been approved for the whole population of the country rather than only 20 million households registered with Ehsaas Rashan Riyat Programme with directions to frame procedural mechanism for limiting the interventions by each family.

The ECC meeting was presided over by Federal Minister for Finance and Revenue, Shaukat Tarin, according to press statement issued by the Finance Ministry.

The MNFS&R submitted another summary regarding intervention price for Cotton Crop (2022-23).
In order to revive cotton production in the country, bring stability in domestic market and assure fair return to the farmers, the ECC allowed Rs. 5,700/40 kg threshold intervention price of seed-cotton.

The ECC further allowed to initially procuring two million bales of cotton at intervention price with direction that quantity would be reviewed on monthly basis.

The committee also approved the proposal of Petroleum Division regarding issuance of sovereign guarantee amounting to Rs 21,000 million in favour of M/s Faysal Bank Limited at considerably lower markup rate for the remaining tenor of the loan i.e four and half years along with issuance of letter of comfort for new finance agreement with respect to pipeline infrastructure development project LNG-II.

The SSGCL would carry out the project of gasification of Jhal Magsi town and would embark the required gas out of the proposed allocation. The injection of this gas will help mitigate SSGC’s gas demand-supply deficit.

Meanwhile the Petroleum Division for addressing PSO and other Oil Marketing Companies (OMCs) concerns over mechanism of payment of Price Differential Claims (PDC) submitted a summary on revised mechanism with the change to the previously approved mechanism that the PDC will be applicable on sale of petroleum products rather than on procurement of products.

The ECC approved the proposal with allocation of additional Rs. 11.73 billion as supplementary grant to meet the expenditure on payment of PDC up to 31st March 2022.

Previous Article Palm Oil Trade Below 6,100 Riggint Per Tonne Due To Low Demand From China And Rumors Of Diplomatic Solutions Among Russia And Ukraine 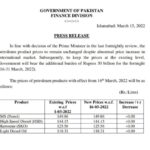 KARACHI PAKISTAN :Pakistan’s consumer price index rose 12.3% in December from a year earlier, according to the country’s official statistics bureau.Edible items were the main […]