The quota for the export of sunflower oil from Russia from April 15, 2022 may be 1.5 million tons, meal – 700 thousand tons. This was reported to TASS by the executive director of the Oil and Fat Union Mikhail Maltsev.

According to Maltsev, it is assumed that the quota will be valid from April 15 to September 1, 2022. The Executive Director of the Oil and Fat Union noted that it is also planned to increase duties on the export of oilseeds and introduce an export duty on oilseed flax.

Earlier, Russian Minister of Agriculture Dmitry Patrushev at a meeting of Russian President Vladimir Putin with members of the government said that in order to maintain a stable situation, the Russian Ministry of Agriculture had worked out an additional set of measures, including quotas for oil and meal. Corresponding proposals have already been sent to the Ministry of Economic Development. He noted that there are no difficulties with the availability of sunflower oil, including due to the previously adopted measures of customs and tariff regulation. 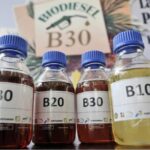