Palm Oil Rebound To Above 6,400 Riggint Per Tonne

Malaysian Palm Oil: Today rebounded to above MRY 6,400 per tonne, on renewed supply worries after Indonesia said that if there is a domestic shortage of refined palm oil, then further export bans can be carried out.

The ban cover shipments of refined palm olein but not crude palm oil. In Malaysia, exports of palm oil during April 1-25 fell 12.9% to 897,683 from the same period in March, cargo surveyor Societe Generale de Surveillance said.

Malaysia is the world’s second-largest producer of palm oil after Indonesia, and its producers have said they cannot meet the global supply gap that will be triggered by Indonesia’s ban on palm oil exports. Even before Indonesia’s ban, palm supplies were already low on drought and shortages from Russia’s invasion of major crop producer Ukraine. 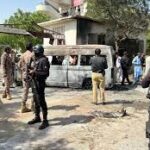 Next Article 2 killed, 2 Injured In blast At Karachi University

Brent Crude Oil: Rose above $94 per barrel on Monday as traders mulled the supply outlook ahead of an OPEC+ meeting, while weighing the impact […]